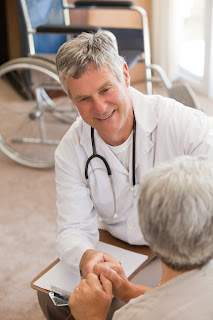 Imagine if you had a job where you could still see patients and talk to them but your risk of getting sued was minimal to none.  Think it doesn’t exist?  Think again!

As a physician evaluator, you take a patient’s history and you do physicals but you do NOT formulate a treatment plan.  That’s pretty low risk.  But what’s the purpose, you ask?  And is there a catch?

Well, insurance companies, medicare, medicaid, etc may want to make sure applicants are really in the shape they say they are on those pesky 10 page enrollment forms.  It’s a risk thing.  Also, some businesses may want that interpersonal face to face value instead of reviewing thick tomes of charts for mining data.

A friend tipped me to this job when he had applied and received a positive response from the company.  It’s a contracted position that pays per H&P.  According to him, the company pays $100 dollars per H&P and they load your schedule with 6-8 per day.  So let’s do the math :

The company offering this job is called CenseoHealth.  It was founded in October 2009 by Dr. Jack McCallum who is an MD and a PhD.  On their website, they state that only full time physicians work there.  However, my friend was about to sign on for a part-time gig, so maybe they’ve changed.

I couldn’t find a link to a career section on their website but I did find a job listing elsewhere and wanted to share it with you.  There seems to be a number of listings in different states so check often to see if one is near you.  If you want some extra money on the side or you just want to get a lower risk job for a while, send them your CV. 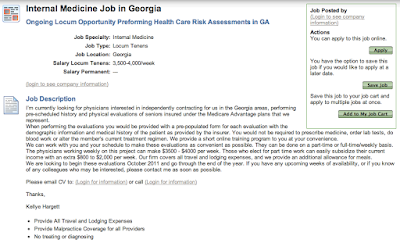 Working On Call – What’s the dough?