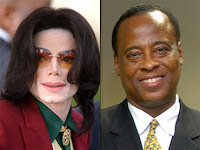 No one can forget the King of Pop’s untimely death.  I was on call when news headlines exploded on tv.  Where were you?

At first, we didn’t know what caused his death, we just knew it was tragic.  Finally, time and science told a story that paints one physician in a very poor light, Dr. Conrad Murray.  He was Michael Jackson’s personal physician and alleged killer.

Dr. Murray is a board certified cardiologist.  He was working for Michael Jackson in May 2009 as his personal physician.  How much did he make?

Well, he could have made $150,000….per month!  That’s what primary care doctors make in a year!  But did he make that much?  I’m not sure.  Although Dr. Murray was treating Michael Jackson, he didn’t receive a dime despite requesting to be paid.

The reason for that is because Michael’s representative company, AEG, had a policy stating no salary could be paid without a contractual agreement.  The doctor’s contract was being prepared and didn’t get fully finished until late June 2009.  Dr. Murray signed it on June 24, 2009 but AEG hadn’t signed it yet.  Michael Jackson died on June 25, 2009.

Dr. Murray is standing trial for involuntary manslaughter.  The trial began yesterday and is expected to last 4-6 weeks.  Can you imagine what kind of salary Dr. Murray’s been getting since June ’09?