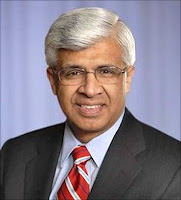 Ever get your blood drawn at the doctor’s office?  Quest handles the blood, runs the test, and reports back to your doctor.  They’re one of the leading laboratories along with LabCorp and Bioreference.  The CEO of Quest just announced that he’s stepping down as CEO.

It’s unsure if he’s retiring at the age of 62, though I’m sure he could if he wanted to.  The reason he’s stepping down is because of how the company has performed over the last few years.  Part of it can be attributed to the economic recession but Quest thinks it’s more because of the costs of restructuring it’s business and recent acquisitions of Celera Corp and Athena Diagnostics.  All of which are major decisions ultimately resting on a CEO’s shoulders.

Quest and Dr. Mohapatra both agreed it was time for him to step down.  He’ll be staying on for 6 months while a a new CEO is found and appointed.

Prior to joining Quest Diagnostics, Dr. Mohapatra was senior vice president of Picker International, which is now a part of Philips Medical Systems.  Dr. Mohapatra earned a Bachelors of Science in Electrical Engineering in India and then a Masters in Medical Electronics in London.  He then went on to get his Doctorate in Medical Physics.

Despite leaving his CEO job at Quest, he still has a job as Director for ITT Corporation for which he gets paid $218,000 or so a year.  He’s also a Trustee of Rockefeller University and a member of the Corporate Advisory Board of Johns Hopkins Carey Business School.